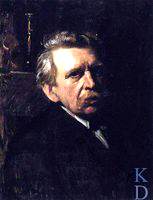 Following his study at the Academy in Antwerp Albert Neuhuys also moved to The Hague, where he met Jozef Israëls, Anton Mauve and others. Through them both he ended up in Laren where he painted poor farmers in picturesque houses: this being his favourite subject. A number of Drenthe interiors by his hand have been preserved as a result of this interest, but it is not known where he worked and when. It is known, however, that Neuhuys – who was fond of travelling – broke his arm in 1906 when his coach overturned near Emmen. An interior of a farm in Meppen is dated 1894, so he had been in this area before. 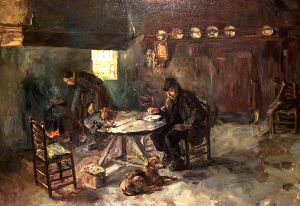