Peter Blok trained as an engineer and for years drew only straight lines. In 1970 an advertisement for courses in creative drawing, watercolours and pen and ink drawing caught his eye. Following which he took many courses, with a particular emphasis on watercolours. He has been a member of KWA in Arnhem, a society of amateur painters, since 2000.

He works almost entirely in the open air, or en plein air, focusing on subjects that interest him.
In unfamiliar areas he often walks around for a while making quick sketches in ink.  He did a complete series in the Dutch Open Air Museum (Nederlands Openluchtmuseum) in Arnhem, for example. He did pen and ink drawings and watercolours too, during a couple of holidays in Drenthe (Aalden, Dalen). 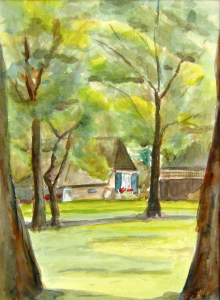