In 1921/1922 some 30 pupils took a course at the Minerva Academy in Groningen: the child of a merchant, a physician, an accountant, a professor, a retired notary public, the director of the sugar factor, a tobacco manufacturer, school headmaster and others, along with just one farmer’s son: Roel Bekkering from Eelde. He wanted to keep alive his memories of special places, especially in Eelde.

The course filled him with enthusiasm and thus he became a farmer who painted. He immortalised hundreds of historic spots, mainly in North Drenthe. Where possible he also sought out historic information about the place and recorded it. And so it was that many years later numerous works and recollections from that time were found in his attic in Eelde: Drenthe landscapes, typical farmhouses and picturesque village views. And in so doing he made an important contribution to the heritage of Drenthe as a whole, and specifically Eelde. 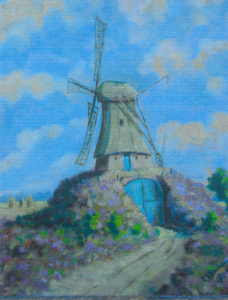